In 2000 the University of Technology, Sydney (UTS) conducted an analysis of the newly developed highly specialised thermal roof coating, SkyCool.

Key findings of that analysis, headed up by Professor Geoff Smith of the Department of Physics are:

"SkyCool has been proven by our tests to be generally capable of eliminating those heat gains through a roof associated with the heating of the roof by the incident solar radiation. Such gains dominate the heat inflow from traditional metal roofs even with batt type insulation installed.
"It achieves this by a combination of two properties, high solar reflectance and high thermal emittance, which we have verified by direct measurement."

Regarding peak cooling loads, the university discovered that:

"Other heat gain impacts will generally be secondary to the effects of the solar heating of a metal roof and so a SkyCool coated roof will almost always either provide much superior comfort under solar irradiation or where air-conditioning is used save substantially on both operating and capital costs compared with the other roof types. The operating costs come from much reduced total cooling requirements and the capital savings from the reduction of the chiller capacity needed to meet peak demands. SkyCool will provide large differentials in peak demand compared to the other roofs since the peak demand conditions are just where it excels."

The UTS report explained the process of heat transfer through metal roofs:-

"The final roof temperature is determined by the rate at which heat is transferred from the roof both to the interior and to the outside (the sky and ambient) and this total rate must equal the absorbed solar energy in the steady state. If heat transfer is relatively easier the temperature stays lower than it would if it was difficult and this (easier heat transfer) is the case with SkyCool. That is its low solar absorption benefit is compounded by its good outwards heat loss capabilities so that the little heat it does absorb is very readily lost. The SkyCool roof cools readily to a clear sky mainly by radiation and hence its heat loss is easy and dominated by loss outwards so little travels inwards, even without sub-roof batt insulation."

"Something quite special happens under bright sun with the SkyCool. The SkyCool roof over insulation is always slightly cooler under a clear sunny sky than its uninsulated counterpart. This is only possible when the net heat flow out from the roof is larger than the solar energy absorbed which means that heat is being added to the heat flow outwards by transfer from the interior and the uninsulated roof can extract more and hence stays warmer. That is, there is net cooling."

“Heat from the SkyCool is much less than the others simply because it absorbs much less in the first place. But its total energy outflow (heat plus reflected sun) is all to the sky and is actually bigger than the incident solar energy where as in the other roofs (Colorbond™ and Zincalume™ used in the tests) this total outflow of energy is less than the incident solar energy because a significant amount goes inwards.”

“Finally it should be noted that heat flows due to the sun with air-conditioning working on the inside will be different to our data. Much more will flow inwards due to lower interior temperatures, and less outwards from the conventional roofs (but not SkyCool) than in table 1. The SkyCool roofs will only have to deal with sources of internal heat gain not directly linked to the sun hitting the roof, and we note that when night cooling occurs on previous nights it may be possible not to worry about these and hence not need air-conditioning much of the time. Detailed studies are needed for specific buildings and climate zones to determine these loads for each roof system and building, but as we noted above, peak loads will be dramatically reduced with SkyCool in many climate zones and these are what determine chiller capacity and cost.”

* Output from SkyCool here is greater than the absorbed solar energy (1062-894=168 W) as it contains a small component due to heat transfer from inside. Note that total energy out (reflected sun plus heat lost) is actually a lot larger for SkyCool with its outward component made up of reflected sun, loss of absorbed sun as heat, and extra heat from the interior. The others do not have this last term and of course also have some of the absorbed sun finally going in, not out.


Professor Smith explains why such extraordinary results are possible, hence the uniqueness of SkyCool:

"This is why this material (SkyCool) achieves its special performance. It has a combination of low solar absorptance (it is "white " at solar wavelengths) and high radiative capability ("black" at thermal wavelengths) with the latter also spectrally selective at the atmosphere-to-space window.

"SkyCool has selective radiative ability in the 8 to 13μ atmospheric window from IR spectra and from performance. This means it absorbs less of the incoming thermal radiation from the environment than ordinary radiating surfaces while still being an efficient radiator." 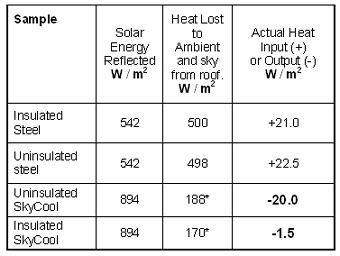